If you are worried about getting old and frail, you are not alone. Most people are afraid of getting old. Fear of old age is not new. No one likes the idea of being bedridden and sick in their old age. We have accepted it as a part of life but also continue to detest it.

However, there is someone who believes that aging that early is not inevitable. Dr David Sinclair, a profess at Harvard University, believes aging to be a disease like any other and thinks that it can be treated. Dr Sinclair teaches genetics at Harvard and is considered a leader in the field of anti-aging. He has been researching the field of anti-aging for many decades. He has written many papers and books on the topic of anti-aging but his most notable works include two books titled “Just in Time: The Discovery of Sirtuin and How It Will Change Everything” and “Lifespan: Why We Age―and Why We Don’t Have To”. In these books, Sinclair presents his theory about aging and explains why we can not only stop aging but also even reverse it. The basis of Sinclair’s anti-aging theory lies in the cellular substances and genes that are associated with aging. 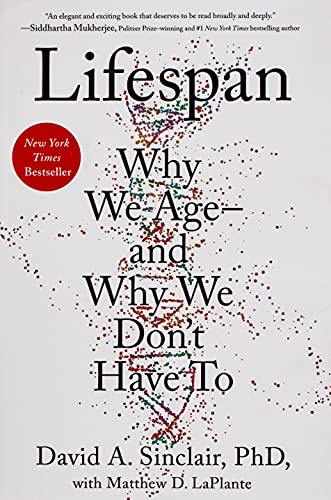 Before David Sinclair’s recent research on anti-aging and the discovery of sirtuins, the field of anti-aging largely relied on calorie restriction. Restricting calories increases the lifespan of many organisms such as yeast, rodents, fish, and spiders. Dr David Sinclair was a huge proponent of calorie restriction for its anti-aging properties. However, at best, the benefits were limited and temporary. The process also requires you to lower your meal portions so that the body goes into energy conservation mode.

The recent approach to anti-aging aims to take the fight to the aging instead of focusing on slowing it down. In Lifespan, David Sinclair presents his ‘Information Theory of Aging’. He says, “I have come to see aging as a disease— the most common disease—one that not only can but should be aggressively treated”. He goes on to state that we are “bringing an end to aging as we know it”. Effective aging is deeper than treating the various diseases that come at old age. It is about sustaining the processes in the body that keep our body young and healthy. David Sinclair believes that increasing the lifespan is not enough and that we should improve the healthspan of our body as well. This entails providing our body with everything it needs to sustain our youth and health.

Sinclair believes that instead of just attempting to slow aging down, we can actually reverse it in humans. While these may seem like tall claims with no substance, he does not make these claims lightly. All his claims are backed by revolutionary This David Sinclair book goes to great lengths to explain why aging is not just something we should accept as our fate. Furthermore, recent research in Sirtuins shows promising results for the field of anti-aging.

Research has discovered the role of genes called Sirtuins in age-related ailments in the human body. Sirtuins are a group of seven genes that are instrumental in regulating aging-related processes. Turning on these gene leads to a wide range of benefits associated with anti-aging. Most importantly, they “protect the chromosomes, they protect stem cells from being lost, they protect cells from senescing.” Calorie restriction is supposed to slow down aging by activating sirtuin genes as well. However, this can be done more effectively and without having to restrict your diet with the help of modern substances.

In the last few years, scientists have discovered that a substance known as Nicotinamide Adenine Dinucleotide (NAD) is effective in turning Sirtuins on. NAD is found in all living cells. As we age, NAD levels in our cells decline progressively. This decline can lead to various aging-related problems. In Lifespan, this has been explained in detail with the help of several research studies done in the field. This David Sinclair book also highlights the fact that declining levels of NAD with age leads to lower Sirtuins activity. That, in turn, results in issues such as cancer, diabetes, osteoporosis, and other diseases associated with aging. We can slow down and reverse aging-related processes by providing our cells with an increased supply of NAD to make up for the losses of NAD, as we age. In order to replenish the lowering NAD levels in our body, its precursors such as Nicotinamide mononucleotide (NMN) are needed. NMN is a precursor to NAD and an increased supply of NMN to the cells can help restore the level of NAD available to the body. While other precursors like Nicotinamide Riboside have the potential to do the same things as NMN, David Sinclair has stated that he prefers NMN over NR.

David Sinclair has stated, on many occasions, that he thinks NMN to be beneficial because of its anti-aging properties. He takes 1 gram (1000 mg) of NMN and 0.5 gram (500 mg) of Resveratrol daily during breakfast. He also takes TMG to replenish the methyl group used by NAD. Since David Sinclair is one of the world’s leading experts on anti-aging supplements, it is safe to assume that whatever he is taking is also not only safe for consumption but also likely to be effective.

The question that arises here is why David Sinclair is believed to be a leading expert in anti-aging. After all, why should we care about the supplements David Sinclair takes and his reasons for doing so? The answer to this question lies in the decades’ worth of anti-aging research done by Sinclair. He has 35 patents to his name while his research papers have been cited over 77 thousand times in other research papers and academic books. The fact that he has done years of extensive research on the subject makes him an authority on which substances are likely to slow down aging. While the research on anti-aging supplements is far from conclusive, enough studies have given us a good place to start.

So far, we have established that Sirtuins are genes responsible for the anti-aging activity, among other things. We have also highlighted the fact that a declining level of NAD in the body can act as a roadblock towards slowing down processes related to aging. In order to increase the levels and availability of NAD for the human cells, a precursor for NAD known as Nicotinamide mononucleotide (NMN) can help increase those required NAD levels because NMN serves as a precursor to NAD.

Renue by Science has extracted NMN from organic sources and turned it into a safe and highly effective product named NMN w/ Resveratrol LIPO Gel.

It comes in the form of LIPO Gel which makes it much more bioavailable than NMN supplements that are taken orally. When NMN is taken orally through capsules, it is far less bioavailable because it gets destroyed in the stomach due to the acids present in everyone’s stomach. Liposomal products are more bioavailable because they protect the NMN inside from damage during the digestion process and deliver NMN safely to the tissues and cells where it is needed.

NMN w/ Resveratrol LIPO Gel of Renue By Science not only provides the advantage of higher bioavailability of liposomes but also provides the benefits of fast-delivery of sub-lingual delivery methods. This Gel is designed to safely deliver NMN to cells in a highly bioavailable manner. It can help restore the NAD levels in cells and tissues to help with many ailments in the body. The increased NAD levels can, in turn, turn on the Sirtuins genes to improve metabolic health and reduce aging.

If you want products that act fast and produce quicker results, LIPO w/ Resveratrol LIPO Gel is for you. It has been designed to be taken sublingually i.e., under the tongue. This Gel bypasses digestion and enters the bloodstream directly from under the tongue. If you are taking this supplement before a workout, taking it sublingually can help you reduce delivery time significantly. LIPO ensures that NMN is intact when it reaches cells. Resveratrol in this product is instrumental in turning on Sirtuins while NMN acts as fuel for these genes.

NMN w/ Resveratrol LIPO Gel by Renue by Science is perfect because it combines the benefits of NMN and Resveratrol. The supplement is sold in a 150 mL bottle at $75.95 per bottle.  There are around 75 servings in a single bottle with 240 mg of liposomal NMN in each serving and 40 mg of Resveratrol. The website has provided third-party testing certificates that prove that the product being sold is safe for consumption and contains all the ingredients mentioned on the bottle.

1. Is NMN safe for consumption?

2. What are the possible side effects of using NMN?

No side effects have been reported in researches studying NMN consumption. Some minor side effects such as leg cramps, flushing, dizziness, and headaches have been experienced by people taking large doses but they can be managed by changing the amount of dosage.

3. What is a proper dose for this NMN supplement?

While the correct dosage for NMN w/ Resveratrol LIPO Gel depends upon your specific goals and how far along into achieving them, among other factors, studies have shown that you can take up to 1000 mg of NMN per day.